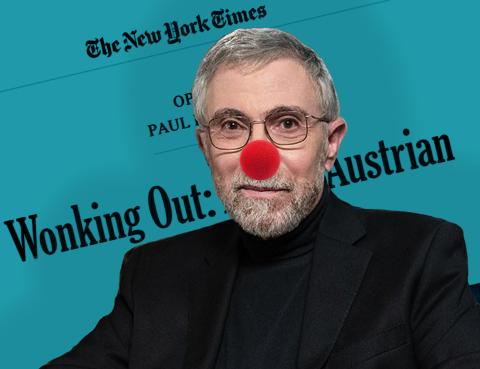 In a recent column for the New York Times, the world’s most famous Keynesian Paul Krugman attacked Austrian business cycle theory (ABCT). In addition to repeating his decades-old claim that ABCT suffers from an internal contradiction, as well as his charge that the Austrians had misdiagnosed the 2008 financial crisis, in his latest piece Krugman argued that the 2020 pandemic really was a “reallocation shock” along Austrian lines. Yet even here, Krugman claims, the Austrian prescription of laissez-faire is dead wrong: as a new paper presented at the Jackson Hole monetary conference allegedly demonstrates, we need easy money from the Fed in order to rearrange labor without causing needless unemployment.

It won’t surprise Mises.org readers to learn that I disagree strongly with Krugman’s column. He makes some casual remarks that mislead his readers on the history of the 1930s, but more seriously, he misunderstands what ABCT actually says. This confusion leads him to reject the Austrian view as illogical, when in fact it is perfectly consistent and explains the data better than a Keynesian approach.