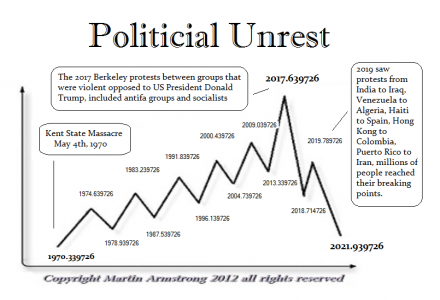 The Kent University State Massacre took place on May 4th, 1970. It was the killing of four students and the wounding of nine others who were all unarmed students by the Ohio National Guard. I certainly hope there is no violence this week. The National Guard after Kent State was never again to appear with loaded weapons. Here on the 20th, it appears that Pelosi preferred marines rather than unarmed “weekend warriors” as she views the National Guard. To placate her demands, the National Guard this week will be armed.

The rise of Antifa really took shape starting with the Berkeley riots in 2017. The Antifa handbook was published in 2017. As the cycle turned, political protests have erupted around the world. There is basically no place that has been immune. My deep concern is that we have reached the culmination of this cycle here in 2021 and the arming of the National Guard is indicative of the start of a new cycle and this appears to be one of increased violence that will lead to revolutions in many parts of the world. All we can do is pray that they do not attempt a siege in Washington this week. It will not end well and can easily be another Kent State Massacre with total repression nationwide thereafter.