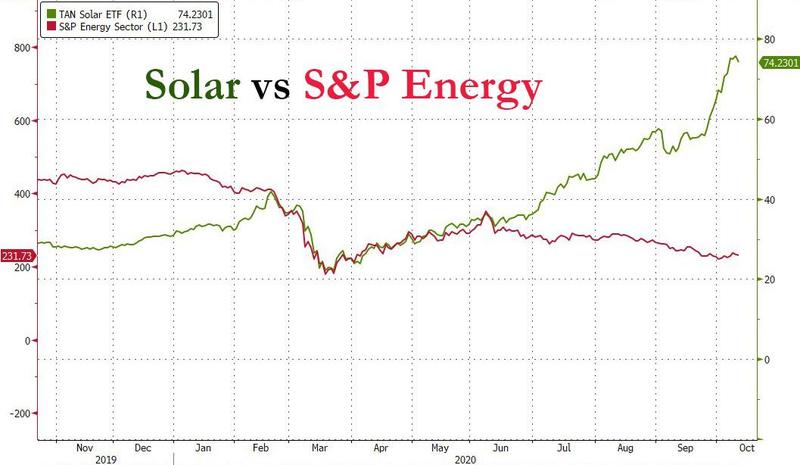 One of the key market dynamics over the past few months has seen traders seeking to best position their portfolios for the outcome of the presidential election, where we have seen a tug of war between tech stocks (a bet on continued deflationary forces and lower yields) on one hand, and small cap/value names which have seen some modest outperformance in recent days as a Biden victory has become synonymous with reflation and stock market upside(with Goldman speculating that as much as $7 trillion in new fiscal stimulus may be unleashed), despite some $4 trillion in tax hikes on deck, including both corporate and capital gains tax increases.

But while the broader “reflation vs deflation” trade has been widely discussed here, and elsewhere, one more targeted trade that has seen less coverage in the media has been the divergence between the legacy energy sector, represented by the S&P Energy Sector and most easily observed by the continued slide in such energy titans as Exxon and Chevron, and clean energy. The thesis is simple: a Biden administration will seek to punish “dirty” energy names while encouraging “green”, or solar, energy development. And a quick look at the recent underperformance in “legacy energy” vs the TAN solar ETF shows just how divergent positioning in this trade has been since early June.