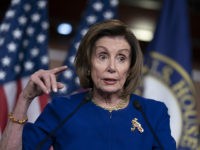 House Speaker Nancy Pelosi (D-CA) said on Sunday’s broadcast of ABC’s “This Week,” that Democratic lawmakers have “arrows in our quiver,” when asked if impeachment was a possibility to stop a lame-duck Supreme Court nomination should President Donald Trump lose the White House in November and the vacancy following the passing of Justice Ruth Bader Ginsburg has not been filled.

Anchor George Stephanopoulos said, “Let me press you though on what happens. You want people to get out and vote. And even that’s no guarantee that the White House and Senate Republicans won’t try to push through a Supreme Court nomination in a lame-duck session even if Joe Biden wins on November 3rd, even if Democrats win, pick up seats in the House, and maybe even the Senate. So what can you do then? Some have mentioned the possibility if they try to push through a nominee in a lame-duck session that you and the House can move to impeach President Trump or Attorney General Barr as a way of stalling and preventing the Senate from acting on this nomination.”