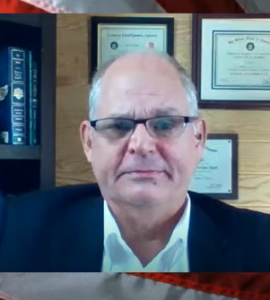 Former CIA Officer and counter-terrorism expert Kevin Shipp says the threat of outright war with Iran is over—for now. Shipp says Iran will change its strategy from overt conflict to covert conflict against the U.S. Shipp explains, “Iran has backed down. There is no question about that, and even their so-called missile strikes against the U.S. are basically just kicking sand, intentionally missing their target. Iran understands if they entered into a war with the U.S., they would be left with nothing more than a burnt stump. So, Iran is backing down . . . What Iran is going to do is engage in asymmetrical warfare. I think they are going to start activating their sleeper cells in the United States and other countries like Saudi Arabia. We are going to start seeing attacks on easy targets in places like Iraq and activation of cells within the United States.”

Shipp is also an expert on the Deep State Shadow Government. Shipp says things are “quiet” on the prosecution of the failed coup plotters who tried to remove President Trump, but ‘that is a good thing.’ Shipp says, “The evidence is already there to pass an indictment on Hillary Clinton and some of the others. So, there is not even an investigation in that regard. . . . Barr’s investigation is now a criminal investigation. They are trying to get a hold of Brennan’s (former CIA Director) emails and correspondence, through subpoenas, during this soft coup, and it looks like they are in the middle of that now, so, hence the silence. They are quiet now and that is a frustrating thing about any investigation. . . .They can’t come out and reveal where they are heading, especially when it comes to the CIA and intelligence agencies. You can’t tip your hand to the person you are investigating. Then they start destroying documents, and people start getting afraid and start covering things up.”