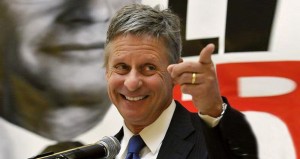 Gary Johnson describes himself as a Libertarian but isn’t one.

A Libertarian is not a “socially liberal/fiscally conservative” Republican – which is what Johnson is, even if he doesn’t realize it.

Republicans, just like Democrats, believe the use of coercion to organize society and direct the actions of individuals contrary to their will is morally legitimate; they just prefer to use less of it – and for different reasons – than Democrats.

Johnson supports forcing people to have their children vaccinated (and according to a schedule decreed by government; that is, by people such as himself). He believes it is acceptable to threaten people with violence in order to compel them to hand over their money (taxes) just like a Democrat; the only difference being the use to which these extorted funds are put. Johnson prefers taxes designed to combat “climate change” or to fund the United Nations. But he does not object to taxes in principle.