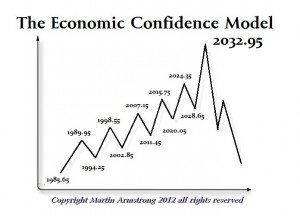 With each peak in the Economic Confidence Model, a different sector becomes the focus. The peak in interest rates occurred on 1981.35 and was the peak of the Public Wave that followed the 1929.75 Private Wave. The Public Wave bottomed on 1985.65 during the summer of 1985. This event marked the birth of the current Private Wave as well as the birth of the G5 at the Plaza Accord. Private Waves are marked by more aggressive government attempts to control everything for they feel the power beginning to slip from their grasp.

[…] That first 8.6-year target in this current Private Wave peaked in 1989.95, which was of course the peak in Communism and the Japanese stock market bubble beginning their long-depression. The mid point was 1987. That first 8.6-year wave bottomed in 1994.25, which marked the peak in emerging markets (South East Asia) and the precise low in the US share market to the day.