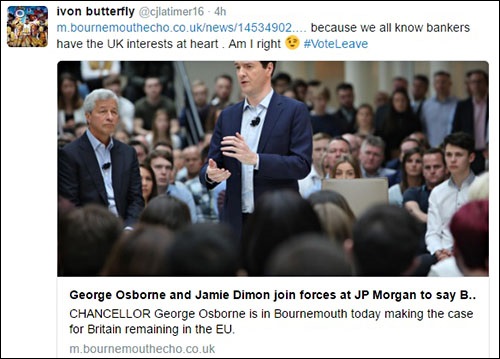 JPMorgan Chase’s perpetually controversial Chairman and CEO, Jamie Dimon, was in Bournemouth, Dorset on the south coast of England this morning to reassure his workers that he wasn’t there to tell them how to vote in the upcoming June 23 referendum on whether Britain should leave the European Union (the so-called “Brexit” or British Exit vote). He then proceeded to tell the sober-faced workers that if they voted for Brexit, he might axe upwards of 4,000 jobs across their country.

Dimon first stated to the crowd of workers:

“I cannot and will not tell the British people how they should vote in this….” A few minutes later, he qualified that by telling the workers how many jobs he might have to cut if Brexit happened: “I don’t know if it means 1,000 jobs, 2,000 jobs, it could be as many as 4,000…I don’t want you to worry about it but when you vote you should be thinking about something like that.”