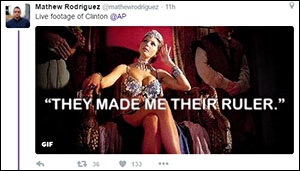 Hillary Clinton was not having a very good morning yesterday. The New York Post had devoted its full front cover to suggesting that Clinton has a Dr. Jekyll and Mr. Hyde personality disorder, based on an explosive new book by a former Secret Service agent who was stationed directly outside former President Bill Clinton’s Oval Office and is alleging outbursts and physical violence by the former First Lady. The book has shot to number one on the nonfiction bestseller list at Amazon.com, meaning more headwinds for the Clinton campaign. On top of that, news was swirling that Senator Bernie Sanders had a good shot of trouncing Clinton in the following day’s critical primary in California, where a massive 475 pledged delegates are at stake. (Five other states are also set to vote today in primaries: New Jersey, Montana, North Dakota, South Dakota, and New Mexico.)