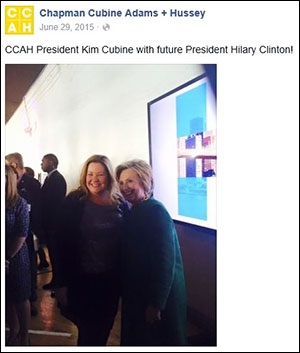 Chapman Cubine Adams + Hussey, the official direct mail marketing firm for the Democratic National Committee (DNC), which currently has two Presidential contenders – one of whom, Bernie Sanders, has won seven of the last eight state races – is overtly putting its finger on the scale for Hillary Clinton.

Senator Bernie Sanders of Vermont announced his candidacy in April 2015, but in the photo above, posted to the official Facebook page of Chapman Cubine, its President, Kim Cubine, appears with Hillary Clinton and calls her the “future President.” Another Facebook post by Chapman Cubine on March 16 celebrates Hillary Clinton’s win in the South Carolina primary. (See graphic below.)