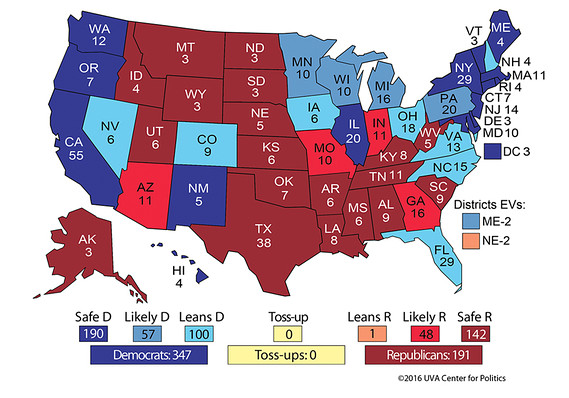 An electoral map from a popular poll guru shows that former Secretary of State Hillary Clinton would handily beat businessman Donald Trump in a head-to-head election.

The map, from University of Virginia Professor Larry Sabato, shows Clinton beating Trump 347-to-191 in the Electoral College, the system the U.S. uses to choose presidents. A winning candidate must receive 270 votes.

Sabato says Trump will strike out in all of the so-called swing states, including Florida, Ohio and Virginia.

Four normally Republican states — Arizona, Georgia, Indiana and Missouri — could be less secure. The latter point is important because all four states have U.S. Senate races, and were Clinton to target them, it could help swing the results of the upper chamber as well.