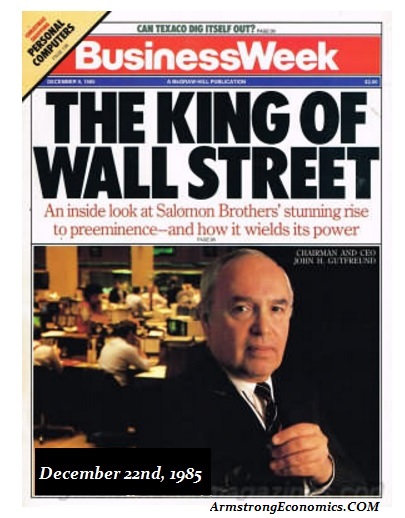 John Gutfreund, which he always pronounced as GOOD-friend, has died at the age of 86 who became known as “King of Wall Street” back in 1985 for building the Investment Bank and bond trading house of Salomon Brothers into the number one underwriter in the world, the number one market-maker and trader of the most profitable investment-banking firms ever to have existed from real trading. Gutfreund assumed control of Salomon in 1978. He agreed to sell Salomon in 1981 for $554 million to Phibro Corp., a publicly owned commodities-trading firm that had benefited from gold, silver, and rising oil prices as inflation spiked in the late 1970s. Gutfreund was deposed as head of Salomon Brothers after the 1991 trading scandal of manipulating the US government Treasury Auctions.