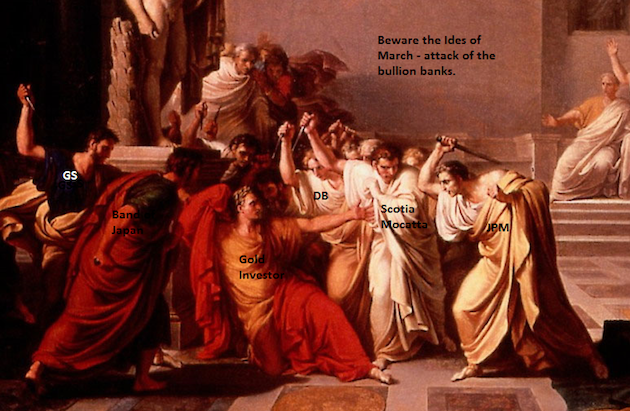 When precious metals expert Michael Ballanger looks at the current state of the precious metals markets, he is reminded of that scene from Shakespeare’s Julius Caesar when the wounded emperor looks up into his friend Brutus’ eyes and utters the immortal words, “Et tu, Brute?”

Caesar says these words as a large scabbard gets plunged into his innards, signifying in modern lore a phrase describing the ultimate betrayal by a friend. And looking at the behavior of the bullion banks as measured against the vast majority of gold “analysts” out there, I would think that many retail investors are soon going to be staring up into the eyes of their friendly financial advisor saying the very same thing. Et tu, Koolaid drinker?

On Dec. 4, 2015, the COT report revealed that Commercial traders in the Crimex Gold pit had reduced shorts over a six-week period from 166,000 net short on Oct. 15 to a paltry 2,911 contracts net short that day, making it the tiniest short position in over a decade and a half and an incredible BUY signal which I captured in a) the Dec. 4 email note and b) the GDX/GDXJ ETF’s and NUGT/JNUG calls I bought over the next three days. The rest is history.