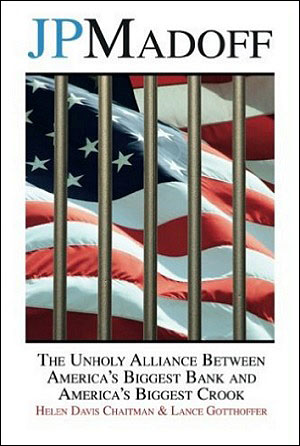 Two interesting things happened this week in Jamie Dimon’s world: two gutsy attorneys, Helen Davis Chaitman and Lance Gotthoffer, published a book comparing JPMorgan Chase to the Gambino crime family, explaining how the bank could and should be prosecuted under RICO statutes for serial frauds against the investing public. Taking a diametrically different tack, Bloomberg Markets magazine editor, Joel Weber, fawned over Dimon in a Bloomberg TV interview, repeatedly asserting that Jamie Dimon is all about the customer.

This Bloomberg video is so hilarious we had to watch it several times to make sure it wasn’t satire. As Weber makes his case that Dimon is all about the customer, his Bloomberg colleague, Stephanie Ruhle, is having none of it, reminding the obviously star-struck Weber that the big banks are hated in this country for good reason. Instead of acknowledging the serial frauds at JPMorgan, Weber suggests (and this is the belly laugh/roll on the floor part) that banks are hated because when you go to a car dealer to buy a car you walk out with one. But if you go into a bank for a loan or credit card, it might turn you down. This brand of logic is on a par with Hillary Clinton suggesting that Wall Street was lavishing millions of dollars on her in speaking fees because she was kind to Wall Street during 9/11.