[Ed. Note: Coming from the man who was disgracefully dismissed as a fraudulent lying journalist… way to go Dan Rather… Because we can trust YOU, right?] 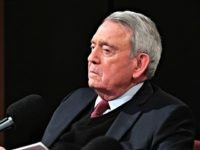 Former “CBS Evening News” anchor Dan Rather said the presidential election in November would show how many people were “dumb enough to believe” President Donald Trump when he says he didn’t want to spread panic in the early days of the coronavirus pandemic.

Rather said, “What this presidential election is about is whether the country’s going to move more in the direction of white supremacy or move more in the direction of a multiracial, constitutional republic based on the freedom and the democracy. That’s the proper frame, in which we now should put this election given what the president says, what he’s been doing — this long list of things. No sense going through the litany, but, you know, he knew in early February how serious the coronavirus was, but he repeatedly misled the American people. He said using an excuse and a lie, he didn’t want to spread panic.”