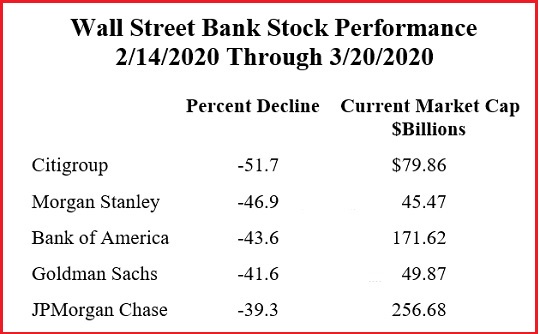 Above is the chart that has the Federal Reserve and its Wall Street money funnel (a/k/a New York Fed) chewing on their worry beads and rapidly rolling out their alphabet soup of Wall Street bailout programs in a replay of their playbook during the 2007-2010 Wall Street collapse.

While Fed and Treasury officials have been repeatedly assuring Americans that these Wall Street behemoth banks have plenty of capital, they’ve actually been bleeding their common equity capital faster than a snow cone in July. In just the past five weeks, from the close of trading on Friday, February 14 through the close of trading on Friday, March 20, five of the largest Wall Street banks have lost an average of 45 percent of their common equity capital.