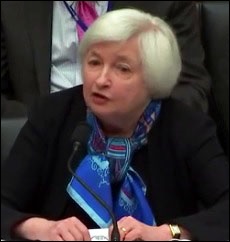 Millions of Americans think that Congressional Republicans are in conspiracy with groups like the U.S. Chamber of Commerce, Cato Institute, Koch brothers, and the Mercatus Center to advance an agenda of increasing corporate profits while sacking the needs of the poor and middle class. That doesn’t mean, however, that Republicans can’t sometimes spot a conspiracy on the part of others.

Yesterday, four Republicans on the House Financial Services Committee, during the semi-annual monetary policy testimony by Fed Chair Janet Yellen, presented a persuasive argument that it’s really the Federal Reserve (which was flattered by many House Democrats at the hearing) that’s sacrificing the poor and middle class in order to benefit the rich and “the Goldman Sachs CEOs of the world.”