Men lost 2 times more jobs than women from the Great Recession and have gained half as many jobs since late 2007. 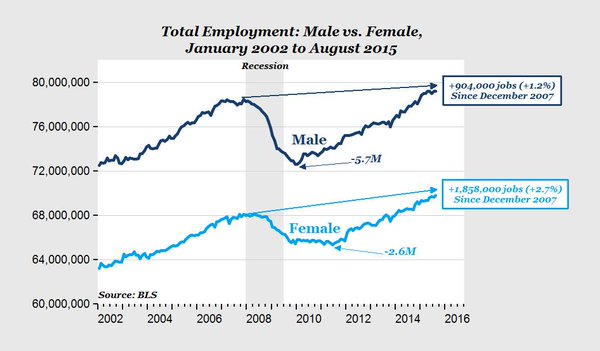 It should be clear that the Great Recession took a toll on most people. This is reflected in household incomes and savings. But one thing that is abundantly clear is that the Great Recession took a massive toll on male employment at a rate twice that of females. We’ll get into the charts and figures later in the article but suffice it to say that the recession didn’t hurt people equally. Some took on the brunt of the damage. When splitting out job losses and gains by gender, it is clear that something else was going on. One reason for this has to do with the big losses in construction and manufacturing that tend to be heavily dominated by men. The housing bubble imploding didn’t help in this respect. In many ways this has been a Mancession even in the midst of a recovery that started in early 2009.