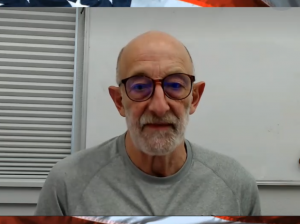 Internet data mining expert Clif High uses something he calls “Predictive Linguistics,” which sorts through billions of bits of information on the Internet to predict future trends and events.

High predicted Trump would win in 2016, and, on election night, High also predicted Hillary Clinton would go “missing,” and both happened. Those are just a few of the big calls High has made over the years. High no longer sells his work to the public, but still does Internet research. High has new data on multiple subjects. Let’s start with new data that paints a very “Dark Agenda” with the lab created CV19 virus and the experimental “vaccines” to treat it. We start with a new term he has come up with called “Vaxxxidents.” According to High’s data, Vaxxxidents are a coming trend for people who have taken the CV19 vaccine. High explains, “Vaxxxidents are going to be caused by the creeping brain fog that is caused by the spike protein (in the vaccine). Spike protein is the bio weapon. It does not matter how it gets into your body, if it comes in through the virus or it comes in with an injection, the spike protein is the toxin. . . . You think less well over time. The time component is going to be months and maybe 24 months. It’s sort of like Alzheimer’s. . . . So, we are going to have accidents all the time. . . . We also have another category, and this is caused by a blood clot in the brain. They are not calling them strokes because they don’t want to assign them as a side effect of the vaccines, but they are both. . . . Some of the more extreme cases will be characterized as ‘zombie’ types of incidents.” (There is much more in this in the interview.)