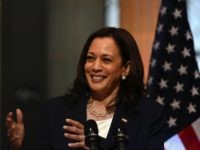 During an interview with NBC aired on Tuesday, Vice President Kamala Harris stated that “We’re not going to see an immediate return” in improvements in the situation on the border from the work she is doing in the region “But we’re going to see progress.”

NBC host Lester Holt asked, “So, how quickly does this change what we see at the border?”

Harris answered, “There’s not going to be a quick fix. We’re not going to see an immediate return. But we’re going to see progress. The real work is going to take time to manifest itself. Will it be worth it? Yes. Will it take some time? Yes.”