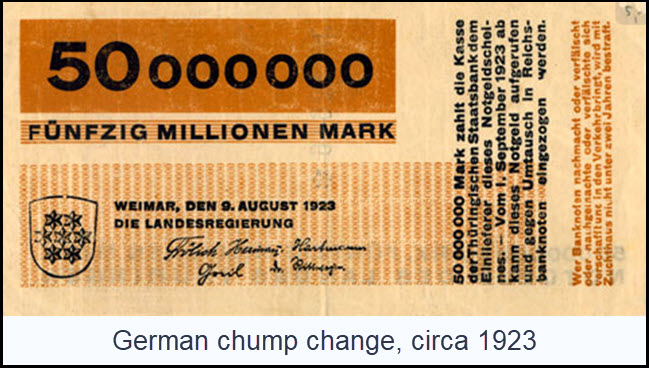 The global credit-blowout has stoked fears of a money-printing catastrophe like the one that wrecked Germany’s economy a hundred years ago, planting the seeds of World War II. However, even a cursory look at the Weimar hyperinflation of 1921-23 reveals why it is extremely unlikely to happen again, especially on a global scale. It was a local event involving physical paper currency that would be nearly impossible to replicate using a global reserve currency, particularly at a time when digital transactions overwhelmingly dominate.

The German hyperinflation featured literal boxcars of D-marks delivered weekly to the biggest employers. The country was a ‘union shop’, so to speak, and the sums sent to workers ahead of each payday were continually renegotiated to include an adjustment for inflation. The system was put in place in order to hold down unemployment and worker unrest. It worked so well, at least initially, that the Germans enjoyed lower joblessness in the early 1920s than some of the Allied nations that had defeated them in The Great War.