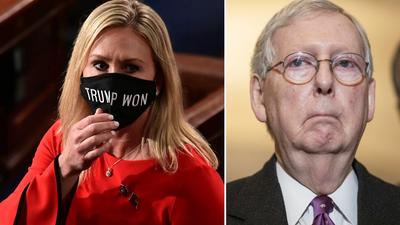 Senate Minority Leader Mitch McConnell (R-KY) drew a line in the sand on Monday between the GOP establishment (the big club you ain’t in), and the populist QAnon movement – whose theories on elite pedophiles and a shadow government were deemed plausible by at least one-third of Americans in an October poll reported by Axios.

McConnell, who voted to go to war in Iraq based in part on a conspiracy theory and fabricated evidence misinformation from some guy, said on Monday – without actually saying her name – that freshman Georgia GOP Rep. Marjorie Taylor Greene’s embrace of “loony lies and conspiracy theories” is a “cancer for the Republican party.”