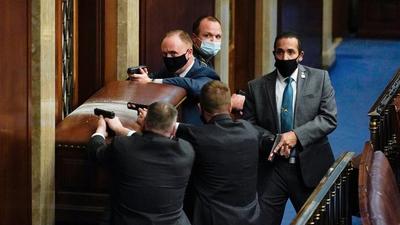 While the whole world is blaming Trump for what happened yesterday at the Capitol, here is a slightly different take from Rabobank’s economst Philip Marey who last July predicted all of Wednesday’s events in a post we titled “Civil Unrest.” Picking up on what he said, here are his follow up observations:

As we noted last summer in Civil unrest, in a polarized society trust in institutions is vulnerable. We explained how the polarization in the US is a process that has been decades in the making. No matter who had won the elections, the turbulence in US politics and society was not likely to pass. Protest, riot, insurrection, sedition, coup, … all of these terms have been mentioned on television. The ever increasing polarization of US politics and society has reached a level that poses a serious threat to the stability of the country.

Adding some more detail to this ominously view, we go back to the conclusion of his July note, which predicted that what is taking place in the US – and really everywhere – is “Only the Beginning”