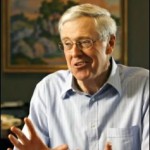 The FBI has asked the public for help in collecting evidence surrounding the siege at the Capitol on January 6 — an insurrection that left five people dead, dozens injured, and Congressional members’ offices ransacked and laptops stolen. The violent scenes at the Capitol played out live on TV, humiliating the United States around the world. The world will watch President-Elect Joe Biden’s inauguration today, surrounded by 25,000 National Guard Troops in Washington, D.C. These images will further undermine the standing of the United States among world leaders.

Because the FBI seems to have ignored for decades the serial warning signs regarding Charles Koch, Koch Industries and their intrusions into elections, we’re providing the FBI a simple and clear roadmap today.

Charles Koch is the billionaire Chairman and CEO of Koch Industries, one of the largest private corporations in the world. Koch Industries is a conglomerate with interests in fossil fuels, refineries, chemicals, paper products and extensive trading operations. For the past forty years, Charles Koch has been involved in a stealthy network of front groups that seek to gut the federal government of its regulatory functions and kill off popular federal programs like the U.S. Post Office, Social Security and Medicare.