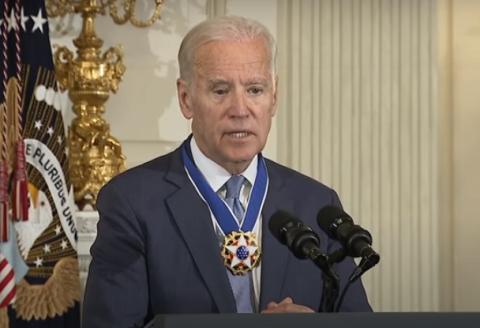 The Washington Post is outraged that Donald Trump has sullied one of Washington’s most hallowed honors—Presidential Medals of Freedom. After the White House announced plans to bestow the medals on two Republican members of Congress and a football coach, the Post thundered that “Trump just underlines his own unworthiness when he makes a mockery of the Medal of Freedom….This president cannot be trusted to hand out medals.”

The Post editorial concluded with the obligatory uplift of the season: “Thankfully, the Oval Office will soon be occupied by a president—himself a rightful recipient of the Presidential Medal of Freedom—who understands and will honor the traditions of the presidency.” Did Biden receive the Medal of Freedom for taking the lead in enacting the 1994 crime bill, which the New York Times reported helped spawn “the explosion of the prison population”? Did Biden receive the medal for helping Barack Obama win reelection in 2012 by telling black voters that Mitt Romney would “put you all back in chains”?