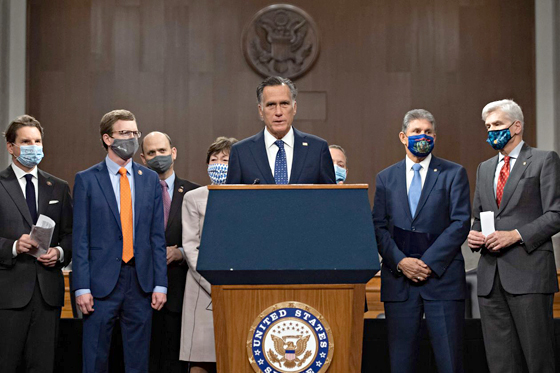 Well, here is a picture worth a thousand words.

Featured front and center is Mr. Crony Capitalist Never Trumper, Mitt Romney, explaining how another $908 billion of Everything Bailouts – on top of the $3.5 trillion that have gone before – is just the thing to do.

In the above photo Romney is speaking for a “bipartisan” group of Spenders Senators including the GOP’s Susan Collins, Lisa Murkowski and Bill Cassidy and Dem Senators Joe Manchin, Mark Warner, Jeanne Shaheen and independent Angus King. He claimed the group was walking a prudent line between Nancy Pelosi’s $2 trillion+ demand and Leader Mitch McConnell’s latest purportedly stingy $500 billion offering:

“We’ve been very careful. This is not a $1.8 trillion stimulus bill,” Sen. Mitt Romney (R., Utah), part of the bipartisan group, said Tuesday. “This is a relief measure – half that amount.”