by Llpoh
The Burning Platform 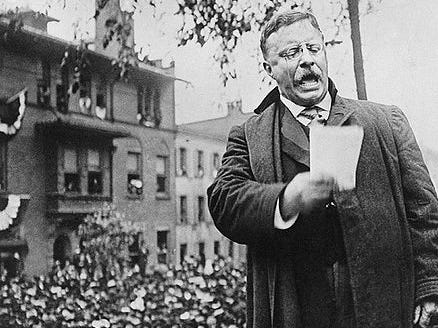 On October 24, 1912, Teddy Roosevelt was shot in the chest just before he was scheduled to deliver a speech. Coughing into his hand and determining he was not lung shot, he carried on with the speech. He spoke for 84 minutes, refusing all attempts to administer him care.

They were unable to remove the bullet that was lodged deep in his chest.

Whatever else he may have been, for sure and certain he was, as he described himself, a bull moose.

Compare that man to the soy boy metrosexuals that voted for Biden, that can today be seen everywhere. The faux tattooed toughness is a disgrace. How the mighty have fallen.