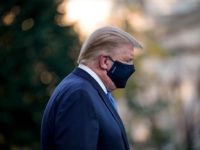 If you believe the polls, Joe Biden and his media allies are running a brilliant presidential campaign against Donald Trump.

As the old saying goes — and it’s an old saying for a reason — when your opponent is defeating himself, get out of the way.

Well, then, what we have, with only about four weeks remaining before Election Day, is Biden and the national media making damn sure 2020 is a referendum on Trump.