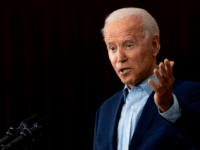 Biden pointed out that the intelligence community has “warned” that Trump’s personal attorney Rudy Giuliani, whose lawyer was given the laptop allegedly containing the “confidential information,” was being “fed disinformation from the Russians.” He then shrugged off the story about his son as “a smear campaign.”

Host Norah O’Donnell asked Biden, “Do you believe the recent leak of material allegedly from Hunter’s computer is part of a Russian disinformation campaign?”