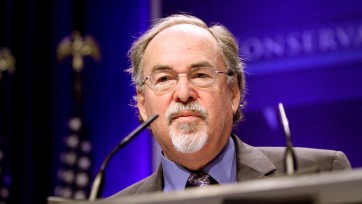 David Horowitz returns… In the August 1st piece on Politico by Jean Guerrero entitled “The Man Who Made Stephen Miller,” they claim that almost 20 years ago I cultivated an angry high-school student named Stephen Miller and that now his ideas are coming to life in the Trump administration. I never claimed to have “made” Stephen Miller. He was a brilliant young man when I met him. Stephen and I are what a reasonable person would call “classical liberals” – we both have written thousands if not hundreds of thousands of words to make clear our positions. But the author of this article is determined to smear us both as racists. This is the fascist mentality of the left. If you disagree with someone, they must be racists. Being against illegal immigration and being for merit immigration, as we both are, is not “anti-immigrant” as this article maliciously claims. To call Stephen or me “hatemongers” and to insinuate that we are racists is just to pull a page out of the slimiest smear site in the country, but it’s par for the course for leftists. Identity politics is racism. The Democrat Party trades in racist attacks on a daily basis. I have written three books on race – all of them organized around Martin Luther King’s vision of a world in which people are judged on their character, not on their skin color. Of course, being a leftist and supporting a Democrat Party Guerrero wouldn’t understand that. Shame on Politico for reprinting this.