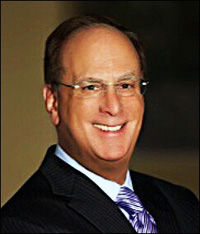 BlackRock, the international investment management firm run by billionaire Larry Fink, has played an outsized role in Federal Reserve bailouts of Wall Street. As it turns out, it’s also been quietly managing hundreds of billions of dollars for more than five million federal government employees in their retirement plan, known as the Thrift Savings Plan (TSP).

During the last financial crisis of 2007 to 2010, the Federal Reserve gave BlackRock no-bid contracts to manage the toxic assets held in three programs known as Maiden Lane, Maiden Lane II and Maiden Lane III. These were Special Purpose Vehicles set up by the New York Fed. Maiden Lane purchased $30 billion of toxic assets from Bear Stearns as an inducement by the New York Fed to get JPMorgan to purchase the good parts of Bear Stearns. Maiden Lane II purchased mortgage-backed securities from the giant insurer, AIG, as part of a program to bail out its securities lending to Wall Street banks. Maiden Lane III purchased collateralized debt obligations (CDOs) on which AIG Financial Products had written credit default swaps that it couldn’t make good on to the Wall Street and foreign global banks to whom it owed the money. (Thus, the AIG bailout was actually a bailout of mega banks.)