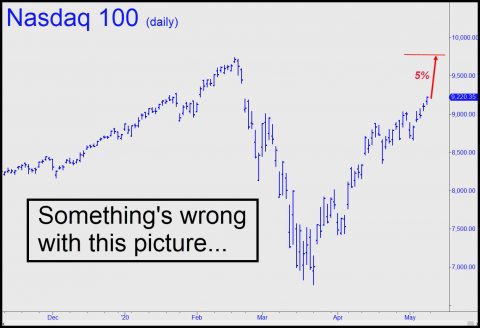 Those who have closely observed the stock market’s ups and downs over many years understand that it often acts as though it were detached from observable reality. This is so obvious at the moment that even casual market-watchers have come to realize that the absurdly strong performance of shares lately reflects nothing less than a kind of mass mental illness. Until recently, so strong a characterization would have been greeted with skepticism by those who are not tuned to the daily histrionics of shares. Think of the skeptics as the extended family of a fictional Aunt Jean, whose behavior, according to family gossip, has grown a little strange lately. She has always seemed a little eccentric, of course, and why should we worry if she has become a little moreso in her dotage? And then the shocker: With everyone seated around the Thanksgiving dinner table, Aunt Jean wrenches the carving knife from her brother’s hands, stabs the turkey ten times, and shrieks “Death to the Paraclete!”