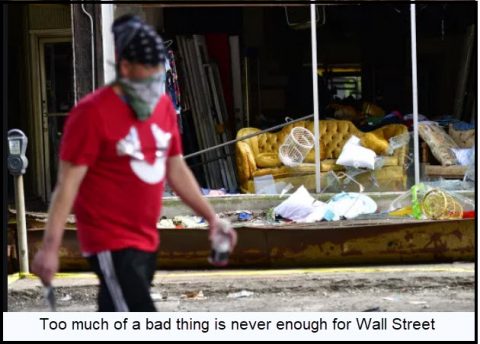 Index futures have done a tentative alley-oop Sunday night, feinting lower before moving as though to challenge Friday’s nutty highs. They occurred, apparently, because Trump was not as hard on China as he could have been when he addressed the nation ahead of the closing bell. Anyone mystified by the stock market’s exuberance hasn’t been paying attention to the steep rally that has occurred with a global depression looming. For a market that has thrived on bad news, the headlines over the weekend could not be more encouraging: looters running amok in America’s largest cities; record unemployment; millions of rents and mortgages going unpaid; a menacing chill in U.S. relations with China; bankruptcies sweeping through nearly every sector; the devastation in particular of travel, dining and entertainment; the huge capital write-downs coming in the energy sector as subways, buses, trains and planes worth hundreds of trillions of dollars face obsolescence. Under the circumstances, need we even ask why stocks are holding up so well? Investors, as we noted here earlier, are mentally ill. Kudlow and Mnuchin might dispute this, but the rest of us know better.