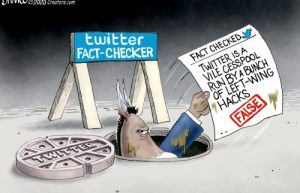 Very big trouble is bubbling over in Hong Kong with the Chinese Communist Party’s (CCP) crackdown of Hong Kong. The CCP has passed a law eliminating all of Hong Kong’s sovereignty and democracy that was agreed to by treaty when the territory was turned back over to China more than two decades ago. It’s just another in many deals the Red Chinese government has reneged on. Trump is taking action, and it will have huge negative implications on the entire U.S./China relationship.

President Trump is striking back at Big Tech and its social media censorship of conservative views. Trump signed an Executive Order “stripping social media companies of their so-called “liability shield.” The action that caused President Trump to act is Twitter’s “fact checking” of President Trump’s tweets over mail-in voting and the President’s charge of massive voter fraud if this is allowed. The “fact checkers” from Twitter said that was not true, but they retracted that charge because it is true, and there is plenty of data to back that up.