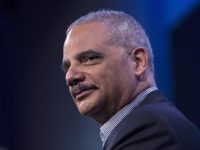 On Tuesday’s broadcast of MSNBC’s “All In,” former Attorney General Eric Holder stated that Attorney General William Barr “is doing all that he can to weaken the very institutions that he leads.” And stated that Barr, among other things, “has supported the effort to keep documents away from Congress.”

Host Chris Hayes asked, “[O]n a sort of scale of 1 to 10 with 10 being like an absolute rule of law emergency, 1 being the kind of normal back and forth of democratic politics, where do you place the moment we’re in right now?”

Holder responded, “I think we’re at a pretty consistent 9. What we have is a president who is bound and determined to delegitimize those parts of the government that he thinks pose the greatest threat to him. That is the Justice Department, the FBI, the intelligence community, as well.”