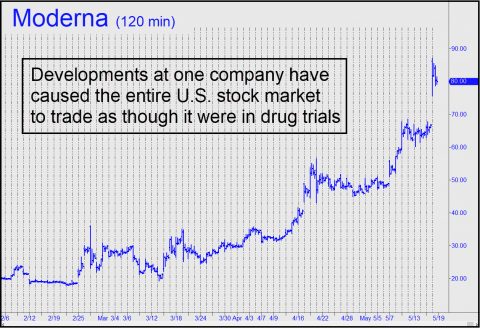 Who could have imagined that the entire universe of U.S. stocks would someday trade like the shares of a small pharmaceutical company with a supposed miracle cure for cancer in the works? That, evidently, is what Wall Street has become: a drug-stock crap-shoot-on-steroids. The Dow Industrials shot up more than a thousand points Monday on word that a vaccine from Moderna was showing promise in initial tests on humans. To understand how far the Cambridge MA-based firm is from defeating Covid-19, consider what Bloomberg news had to say: “The vaccine trials are being conducted in stages, with the first test designed only to look at safety and whether or not the shot created lab markers of an immune-system response. Only in later stages of testing, to be conducted in thousands of patients starting in July, will the vaccine go up against the virus in the real world in a definitive test of whether it prevents or lessens infections.”