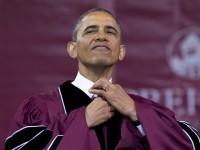 Former President Barack Obama said in a commencement speech on Saturday that current leaders during the coronavirus crisis were failing 2020 graduates.

“More than anything this pandemic has fully finally torn back the curtain on the idea that so many of the folks in charge know what they’re doing,” he said. “A lot of them aren’t even pretending to be in charge.”

The former president did not directly criticize Donald Trump, but he repeatedly referred to leaders currently in power.

“Broad majorities agree on the ends,” he said, urging graduates to seek unity. “That’s why folks with power will keep trying to divide you over the means. That’s how nothing changes.”