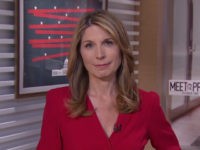 It’s no secret that MSNBC’s Nicolle Wallace and just about everyone else on the payroll at MSNBC are not fans of President Donald Trump.

During Thursday’s broadcast of MSNBC’s “Deadline: White House,” Wallace put that sentiment on display by suggesting a positive result stemming from the coronavirus pandemic was that it would inflict harm to him politically.

The MSNBC anchor referred to that as a “silver lining” of the virus’ impact.

“[T]here is something both tragic, and pathetic, and ironic about the fact that it took a, you know, color-blind, gender-blind, state-line-blind virus to sort of have all of the president’s sins from his first three years catch up with him,” Wallace said. “You can’t stand there and lie. You can’t contradict your scientists because they’re the ones that stand at 66 and 68% public trust, not you. He’s down at 38%. Pence is lower than him.”