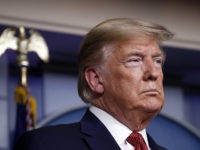 President Donald Trump acknowledged Wednesday at the White House that his name would be on economic coronavirus rescue checks.

“I don’t know too much about it, but I understand my name is there,” Trump said during a White House press conference.

The president did not appear concerned about the reports, despite political critics weaponizing the story against him.

“I’m sure people will be happy to get a big fat beautiful check, and my name is on it,” he said.

Reports revealed Tuesday that the checks would have Trump’s name on them, claiming that his request delayed the checks a few days.