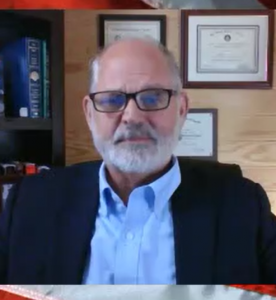 Former CIA Officer and counter-terrorism expert Kevin Shipp says it was not the illness caused by the coronavirus from China, but the hype about how bad it was going to be. The projected death in the US alone was to be in the millions, and that did not happen. Shipp explains, “Remember, the World Health Organization (WHO) also said 3.4% of the population was going to get it and probably die, and they were over-inflated. The problem and the serious part of what this did is cause a panic in our economy. This was bolstered by the news media and drove us into maybe the biggest economic crisis in US history because they over-inflated these statistics. It is no small thing. Our economy has been damaged so badly we will never return to normal. We might get close over a few years, but the damage has been almost insurmountable because they overstated these statistics badly.”

Does Shipp think President Trump will keep the economy shut down? Shipp says, “At first, he had to let them go to show he was handling this pandemic using experts. . . . Trump is a strategist, and I think he is doing this: As he watches the actual numbers go down, and we are down to 60,000 (projected deaths from the coronavirus) from 2.2 million. He’s sitting back waiting for it to bolster his solid case and say, okay, the numbers were way off. Let’s talk about reopening the economy and saving this country from economic destruction.”