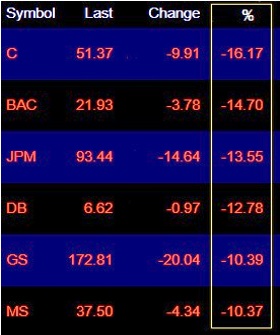 President Donald Trump is bringing a pea shooter to a gunfight. If you look carefully at the charts on this page from yesterday’s trading bloodbath, it’s clear that there is a deep financial crisis playing out. The idea that this can be remedied with a payroll tax cut is the stuff of tooth fairies.

And this crisis didn’t begin with the coronavirus. Headlines about the virus did not start appearing in the U.S. until January of this year. But the Federal Reserve began making hundreds of billions of dollars each week in cheap loans to Wall Street’s banks on September 17, 2019 — the first time it had done this since the 2008 financial crisis. You can earmark September 17, 2019 as the actual date that this Financial Crisis II got underway.

All of the toothless financial reforms of the Dodd-Frank legislation of 2010, together with the rollback of reforms since then, are now coming home to roost — as it was inevitable that they would.