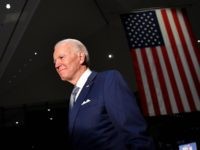 Biden, who defeated rival Sen. Bernie Sanders (I-VT) in key primaries on Tuesday, including Michigan and Missouri, was delivering his first address as the Democratic Party’s presumptive nominee for president, as there seems little way for Sanders to recover.