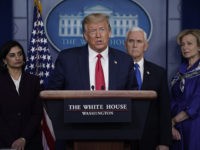 De Blasio said, “The truth is, and New Yorkers and all Americans deserve the truth, it’s only getting worse. April and May are going to be a lot worse. Right now, we are a third of the cases in the country. That’s going to get worse. We’re about two thirds or more of the cases in New York State. That’s going to get worse. But the president of the United States is from New York City, and he will not lift a finger to help his hometown. And I don’t get it. I don’t get it. Right now, I have asked repeatedly for the military to be mobilized for the Defense Production Act to be used to its fullest to get things like ventilators so people who can live who would die otherwise, I can’t be blunt enough. If the president doesn’t act, people will die who could have lived otherwise.”