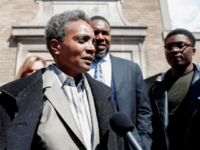 Reacting to O’Hare International Airport being crowded with returning Americans, Lightfoot said, “When the federal government doesn’t listen and when it doesn’t bring the considerations of mayors and governors and other local officials into the equation, not only are you creating a disaster, not only are you creating a hazardous circumstance that threatens the public, you risk causing serious illness and death. Regarding staffing for customs and border patrol, the federal government must immediately and significantly increase personnel devoted to airport screening. And rather than sending ICE into the streets, send screeners to our airports. That’s what we need. That’s what will be helpful.”