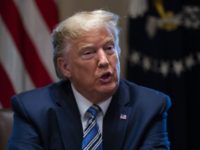 President Donald Trump said at the White House Tuesday he wanted the federal government to send direct payments to Americans suffering economically from the coronavirus as part of a larger rescue package.

“We’re going big,” Trump said, adding, “We want to go big, go solid.”
The proposal was detailed by Treasury Secretary Steven Mnuchin on Tuesday during a press briefing at the White House.

Mnuchin said that Americans could expect an individual stimulus within two weeks as he continued to negotiate with Congress.