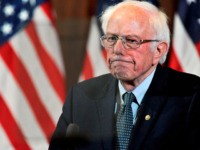 During a town hall on CNN on Monday, 2020 Democratic presidential candidate Sen. Bernie Sanders (I-VT) stated that it was “a good thing” that Fidel Castro taught people to read and write and that China’s government has “taken more people out of extreme poverty than any country in history.” He also stated that he has been “critical of all authoritarian regimes” like China and Cuba.

Sanders stated, “[W]hen Fidel Castro first came to power…he initiated a major literacy program. There [were] a lot of folks in Cuba at that point who were illiterate, and he formed a literacy brigade…they went out and they helped people learn to read and write. You know what? I think teaching people to read and write is a good thing. I have been extremely consistent and critical of all authoritarian regimes all over the world, including Cuba, including Nicaragua, including Saudi Arabia, including China, including Russia. I happen to believe in democracy, not authoritarianism. But, you know, you can’t say — China is another example. China is an authoritarian country, becoming more and more authoritarian. But can anyone deny — I mean, the facts are clear, that they have taken more people out of extreme poverty than any country in history.”