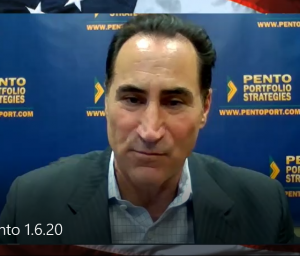 Money manager Michael Pento says forget about the sky high stock market because everything is being propped up with massive global money printing. Pento explains, “Let’s look at the facts. Global debt has now risen above $250 trillion. Let that sink in for a second, and it is a record percentage, 330% of GDP. So, we have never seen debt like this before in nominal terms. Even as a percentage of the phony GDP that is engendered by free money, it is at a record. So, the central bankers have realized that they are trapped. There is no escape from global massive debt monetization. . . . We have China, Japan, Europe . . . and even our Federal Reserve is back in QE. We have a standing repo facility. We could only raise rates to 1.5%, and we are headed back to 0%. So, the only way this massive pile of debt is able to be serviced, even on the margins, is when money is free and central banks continually debase currency.”

Pento goes on to say, “Now I hear from the central bankers that inflation is not rising fast enough. They are panicked that inflation is not rising fast enough. You have to wonder why the faith in fiat currencies isn’t eroding even more rapidly. It is going to because all the ingredients are there. I think the pace of that erosion is going to become a deluge. . . . The zeitgeist of the day should be central bankers are trapped and they can never raise interest rates. Real interest rates will be falling, and if you want a chance of staying in the middle class, you have to preserve your purchasing power, and that means owning gold.”