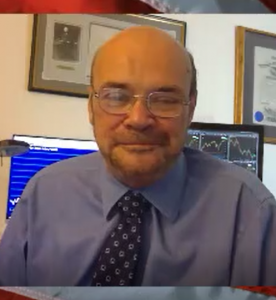 Legendary geopolitical and financial analyst Martin Armstrong says, “The Fed is trapped. If it stops (injecting money into the repo market by billions of dollars daily), interest rates will rise.”

Armstrong goes on to explain, “The Bank of Japan came out and said we’re going to buy government bonds unlimited. They, too, are trying to prevent interest rates from rising. . . . The ECB cannot afford rates to go up. . . . This is a global contagion that’s developing, and it’s pretty serious. The rise in interest rates has tremendous implications all the way around the globe. . . . Interest rates are rising because there is increased risk – period.”

The big risk, according to Armstrong, is global governments, including the U.S. Armstrong says, “You have to understand, at some point in time, capital begins to figure out who is the greatest risk, and the risk is government. At that stage in the game, when that point is reached, then you have shifts. The capital will move from public types of investments, such as government bonds and things of that nature, and then will move into the private sector. That’s equities, and that can be gold and real estate in different places. You try to go to tangible assets.”