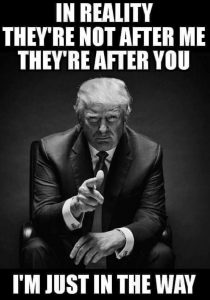 The Dems have done what they have been threatening to do since the hour President Trump was sworn into office–they impeached him. Never mind there was no crime committed or outlined by the Dems. Never mind how unfair the process was. Never mind the so-called whistleblower was never officially identified of even testified. This goes to show you how lawless the Democrats are, and they will void your Constitutional rights just like they did to President Trump to take you down. This Democrat impeachment scam was not just an attack on Trump, it was an attack on “We the People,” and Trump is just in the way.

Rudy Giuliani says, “Impeachment is part of the Dem cover-up. Extortion, bribery and money laundering goes beyond Biden’s. Also, DNC collusion w/Ukraine to destroy candidate Trump.” Trouble is just getting started, and former top federal prosecutor Rudy Giuliani, and personal lawyer for President Trump, says he is going to reveal much more in the coming weeks and months.

The stock market is hitting one new high after another lately. Does that mean the economy is doing well or are they propping it up by injecting trillions into the big banks?