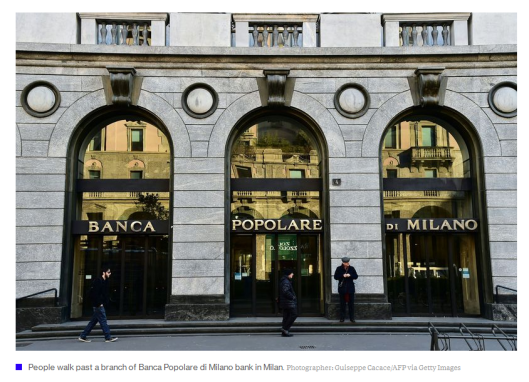 The idea you can take two under-capitalized banks, both seriously in trouble with non-performing loans, merge them, and come out with a much better bank is ridiculous, but that is the route Italy seeks.

Castagna will oversee the combined company, while Saviotti will become chairman of the executive committee. The new bank will be called Banco BPM.

The approval of Italy’s biggest banking merger in almost a decade marks a first step in a process of consolidation urged by regulators, investors and Prime Minister Matteo Renzi. But plenty of obstacles remain to further deals among the country’s beleaguered lenders.

Renzi has encouraged Italy’s weaker banks to combine to shore up their finances and pushed through measures to abolish restrictions on ownership and voting rights, two longstanding hurdles to mergers. Yet further progress may be slow as Banca Monte dei Paschi di Siena SpA, one of Italy’s largest lenders, fights for survival and Renzi’s own political future hangs on the outcome of a December referendum he called to overhaul Italy’s political system.

Italian banks are burdened with about 360 billion euros ($396 billion) of non-performing loans, sluggish economic growth and record-low interest rates. Monte Paschi, shown in European stress tests to be the region’s most vulnerable lender to a severe economic shock, is seeking to tap investors for capital in a complex restructuring plan to stay afloat.

The troubled lender was bailed out twice by the government since 2009 and raised 8 billion euros of fresh capital from investors in the last two years. The bank is now studying a proposal from Corrado Passera, Italy’s former economic development minister, that envisages raising 5 billion euros through a share sale and long-term backers, according to a person familiar with the plan.

Renzi and his finance minister, Pier Carlo Padoan, have struggled to shore up lenders without resorting to direct state aid under European Union rules, which would probably force losses on retail investors. In April, they persuaded Italian banks to set up a 4 billion-euro rescue fund dubbed Atlante, a program critics have deemed too small to restore confidence given that soured debt is equivalent to a fifth of Italian gross domestic product.

The deal is the biggest bank merger in Italy since Monte Paschi’s acquisition of Banca Antonveneta SpA in 2007. It will create a lender with a market value of about 5.7 billion euros, 171 billion euros of assets and more than 25,000 employees.

Merging troubled banks does nothing but create a big mess out of smaller messes. The move does not raise any capital.